When the woman saw that the fruit of the vine was good for food and pleasing to the eye, and also desirable for gaining wisdom, she took some and ate it.  She also gave some to her husband, who was with her, and he ate it.  — Genesis 3:6 (NIV)

Do you know who the serpent represents?  There are three crosses in the picture that let us know God had a plan all along to deal with sin.  Can you find them?  The artist was surprised that some people have found the word "sin" in the painting, since he did not plan for it to be there.  Can you see it? 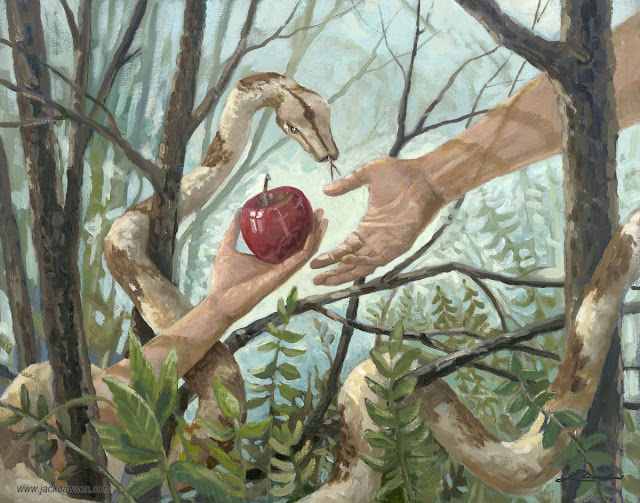 Now the serpent was more crafty than any of the wild animals the Lord God had made.  He said to the woman, “Did God really say, ‘You must not eat from any tree in the garden’?” — Genesis 3:1 (NIV)


God wants us to love Him because we want to, not because we have to, so He made Man with the freedom to choose.  We make many choices every day, don’t we?  But there was a problem.  The tree in the middle of the Garden was so beautiful and the fruit looked so good that Eve wanted to believe the Serpent when he told her God didn’t really mean they would die if they ate it.  Because Adam and Eve chose the wrong thing and did the only thing God told them not to do, mankind was no longer perfect.  Now, because we’re “only human” too, we often make the wrong choices.  Can you think of choices you made just today that you wish you had decided differently?   God warns us in I Peter 5:8 “that old serpent Satan” is still looking for anyone he can trick and destroy.  If we don’t choose to obey God, we’ll fall for Satan’s lies.

God our Creator, thank You for loving us so much You want us to love You back with all our hearts.  Thank You for giving us free choice.  You knew when You gave it to Adam and Eve they would choose wrong and it would cost Your only Son’s life.   Please forgive us when we choose the wrong thing and hurt Your heart.  Help us remember to ask You for help to make the right choices, and to listen to You instead of Satan’s lies.

Ask your children if they think the serpent was creepy and scary like snakes are now, or beautiful, like everything else in the Garden. Discuss with them whether Eve disobeyed God because she was hungry, or because she believed the serpent when he said that she would "be like God." Discuss how she wanted to be like God and why that was wrong. Discuss why Adam also made the wrong choice. Discuss ways that your children could be tempted to disobey and help them discover ways they can resist that temptation. Fun fact: The fruit is never called an "apple" in the Bible.

Posted by Jack E. Dawson's Bittersweet Gallery at 6:00 AM